The United Kingdom has a well developed network of roads. The total length of these roads is about 262,300 miles (422,100 km). Road distances are shown in miles or yards and UK speed limits are indicated in miles per hour (mph).

The earliest specifically engineered roads were built during the British Iron Age. The road network was expanded during the Roman occupation. Some of these survive and others were lost. New roads were added in the Middle Ages and from the 17th century onwards. The modern network was subject to major development from the 1950s to the mid-1990s. 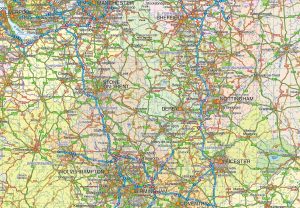 For more detailed information about the British roads visit the page:

Can you identify all these British road signs?

And enjoy The Road Song together with Sponge Bob, his parents and Patrick. Can you choose the right variants of the words in the lyrics?

I see stuff going/flying by.

When I’m on the road,

Patrick: I got a bug/jug in my eye!

[Tempo faster, and Patrick says “road” every half a second]

SpongeBob: I wanna sing it all day/way long!

Let’s all sing along!