Lots of sports were developed in the UK: football and tennis, boxing and hockey. People in different parts of the UK follow some unique sporting traditions. 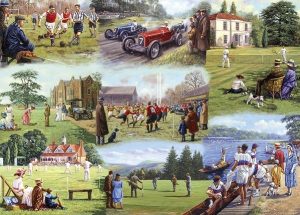 There are three traditional sporting events which are held there every year.

PANCAKE RACE
Forty-one days before Easter Sunday is a special day for Christians. Every spring they celebrate Pancake Day or Shrove Tuesday. It is the day before Lent starts. All over England there were pancake races on or near Shrove Tuesday. The most famous one has taken place at Olney since 1445.
Why is this day called  Shrove Tuesday? And what are the rules of pancake races? The answers are in this video:
THE HIGHLAND GAMES
The Highland games is a Championship which began back in the 11th century in the Scottish Highlands. They are held in September. Modern Games include Highland Dance, Music and the Heavy Events.
Who is believed to be the founder of the Highland games? What 9 events do the Heavy Events competitions consist of? And what does “caber tossing” mean? Watch this video:
ASHBOURNE SHROVETIDE FOOTBALL
The Ashbourne street football game is one of the most famous traditional spring football matches held in a small town in the Midlands every year.  The town is divided into two teams, depending on where the players live. The ball is hugged close to chest, or thrown or kicked – the footballers try to get first to their opponents’ goal posts which are 3 miles apart.
Feel the special atmosphere of this wild game in the video: