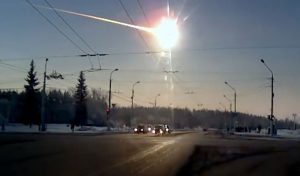 It quickly became a brilliant superbolide meteor over the southern Ural region. The light from the meteor was brighter than the Sun, visible up to 100 km away. It was observed over a wide area of the region and in neighbouring republics. Some eyewitnesses also felt intense heat from the fireball.

Due to its high velocity and shallow angle of atmospheric entry, the object exploded in an air burst over Chelyabinsk Oblast, at a height of around 29.7 km. The explosion generated a bright flash, producing a hot cloud of dust and gas that penetrated to 26.2 km, and many surviving small fragmentary meteorites, as well as a large shock wave. The bulk of the object’s energy was absorbed by the atmosphere, with a total kinetic energy before atmospheric impact estimated from infrasound and seismic measurements to be equivalent to the blast yield of a nuclear weapon in the 400–500 kiloton range. 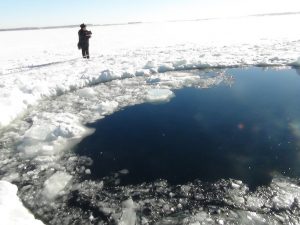