Thanksgiving is a very American holiday. It is also called Thanksgiving Day. It is celebrated on the fourth Thursday in November every year. 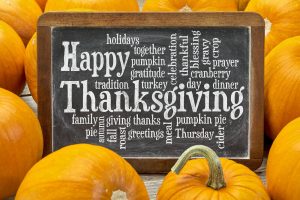 It used to be a religious holiday to give thanks to God. There are two versions of the origins of this holiday. One is thanks for the early settlers arriving in America safely. On December the 4th, 1619, a group of English pioneers arrived at a place called Berkeley Hundred, in Virginia. The group made a promise that the day of their arrival should be a “day of thanksgiving” to God. The second version is the thanks given to Native Americans for teaching the pilgrims how to catch eels and grow corn in Plymouth, Massachusetts. In 1941, President Roosevelt made Thanksgiving a federal holiday.

The main event of any Thanksgiving is the Thanksgiving dinner. It is traditional to have baked or roasted turkey. This is usually accompanied with mashed potatoes, sweet potatoes, fall vegetables, cranberry sauce, and gravy. Pumpkin pie is the most commonly eaten dessert. The Thanksgiving holiday weekend is one of the busiest times of the year for travelling. It is a four-day or five-day weekend vacation for most schools and colleges, and many businesses and government workers get three or four days off. Thanksgiving is also the unofficial signal for Christmas preparations to begin. Once Thanksgiving finishes, stores fill their shelves with Christmas goods. It is also a bad time to be a turkey.