Music is a very interesting phenomenon. It is loved by lots of people and there are so many different types of music around us. 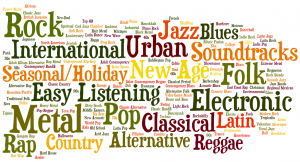 In the video from LEARNEX some phrases, used to describe the effects of music on people are going to be discussed.

Try and do the tasks to enlarge your vocabulary:

Jazz     – it is a type of music that has its roots in Western African culture.

Pop      – it is basically popular music that is mostly heard on the radio and on TV. It is called Pop music.

Rock      – It has evolved from rock and roll and pop music.

Retro     – It has style and elements from the past. Certain cities have clubs that play retro music on certain days of the week since a lot of people enjoy dancing to the tunes.

Heavy metal – It is a type of rock music, but the lyrics and the performances of artists are associated with aggression.  Some well-known bands are Metallica and Megadeth.

Hip-Hop  – It has its roots in the Afro- American culture. It has a very young beat to it. It is mainly based on rap culture and break dance.

Romantic     – It always has a very good melody, the music is very light and makes you feel great. Mostly those who are in love would always want to listen to such kind of music because it makes you feel closer to your loved ones.

Ambient    – It is very soothing and related mostly to the atmosphere and environment. It is very light and makes you calm.

These are some of the genres of music.

Music also has different effects on people, depending on whether we listen to good or bad music. So let’s see how we can express ourselves when talking about music in English.

III.           Which of these phrases help to express positive emotions and which are about negative ones? Put + or –

–___That is too much of noise than music.