SONGS IN MOVIES: EMINEM “LOSE YOURSELF”

The track Lose Yourself became the first hip-hop song to win Best Original Song at the Academy Awards (Oscar) in 2002, though the rapper himself wasn’t there to accept the prize. Lose Yourself went on to be nominated for five Grammys, winning two. The tune was created specifically for the movie 8 Mile which was based on the musician’s life. 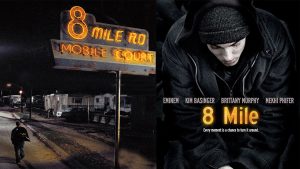 Follow the link to learn some facts from Eminem’s life:

The hip-hop star’s single Lose Yourself was recently certified diamond by the RIAA (Recording Industry Association of America), which signifies it has officially shifted 10 million equivalent units. It’s worth mentioning that those 10 million in the United States alone, and the song’s full sales and streaming figures are much, much larger.

Listen to the song and fill in the missing words (to see the correct answers – select the text:)

Look, if you had, one shot, or one opportunity
To seize everything you ever wanted. In one _________ moment
Would you capture it, or just let it slip?

His palms are sweaty, knees weak, arms are _________ heavy
There’s vomit on his sweater already, mom’s spaghetti
He’s nervous, but on the surface he looks calm and ready to drop bombs,
But he keeps on forgetting what he wrote down,
The whole crowd goes so loud
He opens his mouth, but the _________ words won’t come out
He’s choking how, everybody’s joking now
The clock’s run out, time’s up, over, blaow!
Snap back to _________ reality. Oh, there goes gravity
Oh, there goes Rabbit, he choked
He’s so mad, but he won’t give up that
Easy, no

He won’t have it, he knows his whole back’s to these ropes
It don’t matter, he’s dope
He knows that but he’s broke
He’s so stagnant, he knows
When he goes back to his mobile _________ home, that’s when it’s
Back to the lab again, yo
This whole rhapsody
He better go capture this moment and hope it don’t pass him