Every year some terms attract vast attention of people all over the world. In 1971 the tradition of defining the most popular world of the year was created by the The Gesellschaft für deutsche Sprache (Association for the German Language). 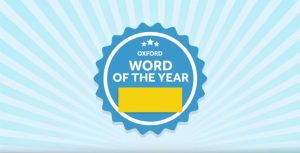 Watch the story about the most frequently used word and fill the given words into the gaps:

The adjective toxic is defined as ‘_____________’ and first appeared in English in the mid-seventeenth century from the medieval Latin toxicus, meaning ‘poisoned’ or ‘imbued with poison’.

The medieval Latin term was in turn borrowed from the Latin toxicum, meaning ‘_________’, which has its origins in the Greek toxikon pharmakon – lethal poison used by the ancient Greeks for smearing on the points of their__________.  Interestingly, it is not pharmakon, the word for poison, that made the leap into Latin here, but toxikon, which comes from the __________word for ‘bow’, toxon.

To check yourselves you may find the full version of the text here.